Public Consultation about the new…

Between 12-3pm @ the Hub
Refreshments available in the cafe area

WHAT SHOULD OUR LOVELY NEW BUILDING OFFER PARK USERS?
COME AND HAVE YOUR SAY!

Fill in our questionnaire:

What other activities would you like to see in the building?

As part of the community-led regeneration of our park, the Eco-Hub has been built for the benefit of the park’s many user groups, and for park users generally.

The community was involved in the design and even helping with the construction. The building has recently won 2 design awards for its community facilities environmentally-friendly design.

There have been some ‘teething problems’

At the moment it is partly open

The Friends (local park users) are running the Community Room at the back of the building for meetings etc, and the Parent & Toddler Group has open sessions there every Tues/Thurs 11am-2pm. Park user groups have also organised some great events using the whole place. The Friends have set up a special Hub Cooperative and are applying to manage the whole building. Please fill in our Questionnaire!

On Sundays 12-2pm the Community Room is open – please look in!

Exhibits/entries for the show accepted from 8.30am to 11.30am. Public display from 1pm. Awards ceremony 3.30pm.

Organised by Back 2 Earth: info@back2earth.org.uk Supported by Friends of Lordship Rec and Sustainable Haringey

Feeling Good in the Rec

Organised by the Women’s Association of Lordship Rec

Haringey’s river, the Moselle, joins the River Lea at Markfield Park, N15 (having flowed throughout the borough from Muswell Hill). It has influenced the geography and history of Haringey. The river is underground for much of the walk route, but there will be stops and talks along the route which includes the High Road (stopping at Coombes Croft library where the river is visible beneath a glass cover in the foyer), through Tottenham Cemetery and on to Lordship Rec where the river has been recently brought above ground and restored with four new bridges amidst wonderful wild flower meadows.

Organised by “A river runs through it” project: www.ariver-runsthroughit.org.uk

A chance to review what we’ve all achieved together

– and to discuss the next steps for making our park

a fantastic place for the whole community

500 tottenham residents attend the 75th anniversary and re-launch of the nationally-unique Lordship Rec Model Traffic Area
– people of all ages celebrate the past, present and future of cycling

On Saturday 27th July 2013, 500 Tottenham residents and others from further afield – including over 200 children and youth – came to mark the recently-refurbished nationally-unique Model Traffic Area’s on its 75th Anniversary (to the day!), to celebrate the history of cycling, and the future of cycling in Lordship Rec. The event was organised by the local Rockstone Foundation bikeability organisation, the Friends of Lordship Rec, and the Lordship Trax cycling club.

There was a special opening speech from Barbara Leadbitter, aged 82, on how she as a local young girl remembered the creation of the ‘wonderful’ track in 1938 (the first in the world!) and played there ‘all the time’… There then followed speeches from the organisers and finally from the Mayor of Haringey. The red tape was then cut to officially re-launch the Model Traffic Area and its new era as a resource for future generations.

200 cyclists of all ages then made a procession all around the MTA circuit. This was followed by an obstacle course for children, and all who took part received a special medallion and certificate. 2 Dr Bike areas were in operation to help participants get their bikes fixed, and there were 6 related stalls (including Haringey Cycling Campaign, Smarter Travel, and Haringey Sports)

The event also involved the adjacent Eco-Hub building. Inside was:
– display of historic photographs about the Rec, including from the Model Traffic Area throughout the decades since its opening in 1938
– sumptuous food and refreshments
– a cycling related film show

”  Like thousands of others as a child I used to frequent the model traffic area and was sad to see it fall into disrepair. I am very glad that the area has been renovated and I’m honoured to have helped organise the first public event there since the works were completed. In the coming months and years my group plans to work with young people at the site to promote the joys and benefits of cycling to new generations.”
– Ricardo Johnson, Rockstone Foundation

See the incredible news clip of the 1938 opening by the Minister of Transport on July 27th 1938!:
http://www.britishpathe.com/video/model-traffic-area-no-1/query/Tottenham+Lordship

On Tuesday April 2nd 2013 hundreds of local youth joined in a range of sports activities in Lordship Rec, Tottenham’s district park. The special event was organised to celebrate the history of youth sports in the park, the thriving range of sports activities there and plans to expand such activities, the re-launch of the recently-improved sports field, and the achievement of Fields In Trust ‘QE2’ protection status for the park for all time*. The events of April 2nd also launched an easter holiday 10-day programme of sports and activities, mainly for young people, in Lordship Rec, April 2nd-12th, co-ordinated by a Community/Council partnership.

There was a football tournament, 2 touch football and archery to re-launch the sports field, a range of sports activities (including netball, rugby, tennis basketball and athletics) in the adjacent Broadwater Farm Community Centre, and boxing in the new Eco-Hub building. There was also gardening taster sessions in the Harmony Gardens by the Community Centre in which young people were able to plant sunflower seeds to take home in pots. And all to a backing track of music from the nearby Shell Theatre.**

At 1.30pm there was an offical ‘unveiling’ ceremony  for the plaque noting the Fields In Trust ‘QE2’ status for the park, in which Haringey Council’s cabinet member for parks, Cllr Nilgun Canver, formally handed over the plaque to Clasford Stirling of Broadwater United FC and Dave Morris of the Friends of Lordship Rec (see attached photo). The ceremony was attended by over a hundred young people, other members of the public, parks staff, Leisure Services officers, Councillors, members of Lordship Rec user groups and others. Brief speeches by Clasford Stirling and Dave Morris thanked everyone who had worked so hard together over the years to improve the park and organise activities there, and they urged young people to enjoy and treasure the park for years to come.

Afterwards Dave Morris, Chair of the Lordship Rec Users Forum, said:  ” The tremendous progress and improvements made in Lordship Rec are the result of years of  community/Council dedication and partnership-working, backed by access to the additional resources needed to make it possible. We encourage all local residents to come and enjoy the new facilities.”

*  Last summer in recognition of the importance of the sports field and of all the efforts to regenerate the whole park, Lordship Rec was granted ‘QE2’ status by the national ‘Fields In Trust’ organisation, giving it protection for all time as a public green space for sports and activities.  In fact in December 2012 Lordship Rec received a national Runner Up award for the ‘Most Improved’ of the 1,500 QE2 spaces in the country! See the full story below…

Background history of the sports field, and ‘QE2’ status for the park

The Lordship Rec sports field is the enclosed area in the north east corner of the Rec. Up to the 1980s it was the playing field of Somerset School (formerly Rowland Hill School). When the old school was demolished to build the Somerset Close housing estate, the Broadwater Farm Youth Association led a successful campaign to protect the field for community use. The community then cleared the field of rubble and adopted it for the youth of Tottenham. Broadwater United Sports and Football Academy (BUSAFA) was set up in 1981 and its teams have used the pitches ever since. Volunteers from BUSAFA, along with staff from the Broadwater Farm Community Centre and the Lordship Rec gardeners, have managed and maintained the field and its pitches.

Over the years many thousands of local youth have played regular football on the field, and over 200 have gone on to semi-professional and professional status. For a few years in the 1980s there were also regular cricket matches organised by the Tottenham Cricket Project.

In 2002, members of Broadwater United and the newly-created Friends of Lordship Rec got together to set up the Lordship Rec Users Forum. The aim was to bring together all the key community groups and partners to work with the Haringey Council Parks Service to develop a community vision and plan for the regeneration and co-management of the whole park. The LRUF has also organised annual community festivals in the Rec. Last September 8,000 residents attended the Lordship Rec ‘re-launch’ festival to celebrate the completion of £4m of lottery-funded improvements throughout the park. This included drainage, re-seeding and border improvements to the sports field itself.

Last summer in recognition of the importance of the playing field and of all the efforts to regenerate the whole park, Lordship Rec was granted national ‘QE2’ status, giving it protection for all time as a public green space for sports and activities.

In fact in December Lordship Rec received a Runner Up award for the ‘Most Improved’ of the 1,500 QE2 spaces in the whole country!

Let’s ensure that the sports field and the park as a whole continue to have a great future serving the people of Tottenham! 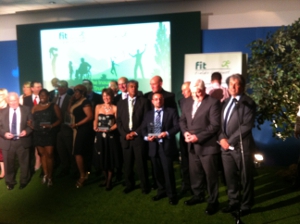 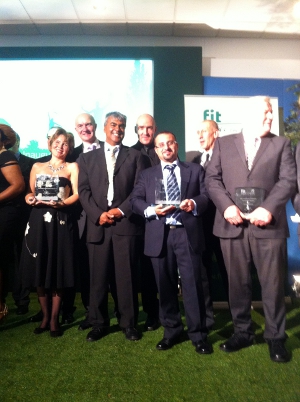 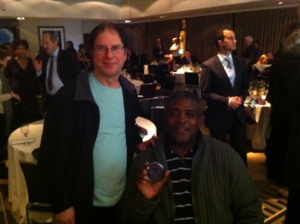 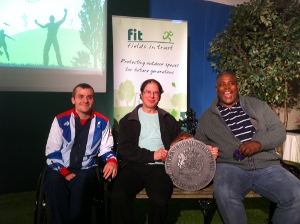 Peter Droussiotis, Friends of Albert Road Recreation Ground Chair, said: “Thanks to the combined efforts of FARRG and of our key partners, notably the Pavilion Sports & Café and Haringey Council, and the work of so many dedicated volunteers, and because of the support of the local community, which has championed this park at every opportunity, we have secured yet another important national recognition for our local park. This is a fantastic level of success for a relatively small park in this National competition and feels like a true reflection of the spirit and energy of all those involved. Well done to all.”

Dave Morris, Friends of Lordship Rec, said: ” Lordship Rec went into serious decline after the controversial public service cuts across the country in the 1970s and 1980s, with often just a couple of local community groups (Broadwater United and the Lordship Mother & Toddlers Group) trying to maintain activities there in the 1990s. The Friends of Lordship were set up in 2001, one of around 5,000 Friends groups which have sprung up over the last 15 years across the country to campaign for the resources and management our vital green spaces need. It has taken a colossal effort by local residents in partnership with the Council’s parks service, backed by over £5m of Lottery funding, to rescue and renew Lordship Rec. Now green spaces in Haringey and across the UK face another national financial crisis and we call on the public to join in the continuing efforts to defend, improve and speak up for them all. “