The lake has been a feature of this area since the 19th Century and is believed to be on the site of an Anglo-Saxon moat. At one time it was used for boating but now it is purely a wildlife area. It is home to a variety of birds, amphibians and insects.

In 2005 the Friends of Lordship Rec took on a project to make improvements to the lake area making the paths around the lake more accessible and installing more benches and picnic tables where visitors can sit and enjoy the view and the birds. For those wishing to investigate what lives in the water there is a dipping platform and also attractive boards with information about the animals that live in and on the lake. Planted banks were made to soften the hard edges of the lake and to grow into an enhanced habitat for the wildlife on the lake.

In February 2016 the Friends received a grant to do further improvements. We planted new areas in the lake, built and installed 2 more planted floating islands for nesting birds, did some renovation work to the dipping platform and added a new interpretation board with information on responsible bird feeding and the negative impact on wildlife and water quality of white bread. We also added a couple more picnic tables. There is a small group of people who concentrate on the lake and we are always thinking of new ways to improve it for park users and for the wildlife. Look out on the calendar for meetings of the Lake Group if you want to get involved. 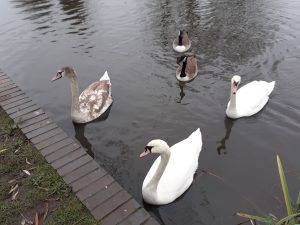 There is an island in the lake where birds can nest undisturbed. (see The future – projects, and About the Park-Wildlife)