The historic, Shell Theatre in Lordship Rec is having a fantastic makeover. Members of our community are helping to bring to life the stunning design of internationally renowned Tottenham artist, Camille Walala. The new look Shell is going to be the stage for many performance and music events throughout the Summer, starting with Blocko 22 on Saturday 25th June 12 noon and hopefully it will become a popular venue as it once was decades ago when it was a focal point for community activity. 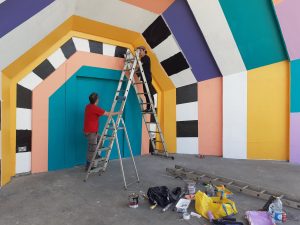 The paddling pool in Lordship Rec will be open every weekend from 3rd June and then open every day in the Summer holidays from July 25th-4th September 2022. Enjoy! 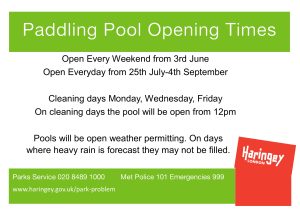 FRIENDS OF LORDSHIP REC OPEN MEETING FOR ALL LOVERS OF THE PARK, Sunday 5th June, 2pm-3.30pm @ The Hub  This coming Sunday is our monthly Friends of Lordship Rec meeting to share news and views about Lordship Rec – eg about the woodland, the orchard, the lake and river, ParkRun, Shell Theatre mural plans, activities and volunteering opportunities etc. Why not come and join in? We especially welcome new people. There’ll be lots of updates,and info about volunteering sessions to maybe get involved in, and initiatives to get excited about!   Here’s a brief Update (from last month’s meeting): https://lordshiprec.org.uk/wp-content/uploads/2022/05/FLR-meeting-mins-1.5.2022-pdf.pdf

LORDSHIP REC FESTIVAL, Saturday 4th June 1-6pm.. in the main field, Shell theatre and near the Hub there will be stalls, live music and performances, sports to join in, activities and crafts, food and much more… for all ages! More info: https://www.haringey.gov.uk/events/202205/people-need-parks-event   Look out for the Friends’ stall near the Hub. See you there!

SPECIAL FILM SHOW at the Hub on Friday 24th June, 6.30pm. Did you know?  In the 1990s, before the Friends of Lordship Rec was set up, our very own Chair (Dave) and former Lordship Rec gardener (Helen) took on McDonald’s – the global junk food corporation – in what became the longest and one of the most controversial trials in English legal history, backed by a successful global mass defiance campaign? This month (June) will be the 25th anniversary of the ‘McLibel’ verdict. The whole incredible story was captured in an award-winning 90min documentary shown on BBC and around the world: ‘McLibel’. https://en.wikipedia.org/wiki/McLibel_(film)   Dave and Helen will be attending this special showing to answer questions etc. The room is likely to be full so if you want to attend please book free seats from Joan: joanhcurtis51@gmail.com

HUB COMMUNITY DAY + BLOCORAMA Saturday 25th June..  The Hub will be open all day with free activity taster sessions, music and of course the cafe. Includes special Hub members/supporters meeting around 12 noon followed by the cutting of a giant Hub Birthday Cake to celebrate the Hub’s 7th anniversary. In addition there will be a Blocorama steel pan extravaganza in the main field and Shell Theatre.

If you’d like to get actively involved in the Friends from time to time (eg one of our volunteer working groups), but can’t make this Sunday’s Friends meeting, please fill in this survey:  https://www.surveymonkey.co.uk/r/KF97ZXC      General info about the Friends (history, what we do etc) here: https://lordshiprec.org.uk/get-involved/the-friends/

Best wishes from all of us in the Friends

LUKE HOWARD ANNIVERSARY
Come to a meeting to help organise a celebration of Luke Howard (namer of clouds) who was born in November 250 years ago.
Sunday 24th April at the Hub 11.30am.
WHO WAS HE?
Luke Howard was a chemist by training, but his passion was clouds. He solved a centuries-old problem by developing a system for naming clouds, which were believed to be impossible to name. Using Latin, the recognised language of science, he named the key categories Cumulus (Latin for Heap), Stratus (Latin for Layer) and Cirrus (Latin for a Curl of Hair). Categories which are still used today and easy to recognise by looking up at the sky.

During his journeys on Quaker business, Luke Howard travelled across the country where he noticed the differences in temperature in the newly industrialised cities. In doing so he was the first person to identify what are now known as Urban Heat Islands which are implicated in Climate Change.

Come along to a meeting on Sunday 24 April at 11.30am at Lordship Hub to find out about and help carry out the plans to celebrate this inspiring figure – ideas already being developed include a Luke Howard Weather Station, Cloud Interpretation boards at Lordship Rec and a weekend of events 26/27 November 2022 including talks, poetry, art, photography, camera obscura and cloud viewing.

Something else to celebrate on Luke Howard’s anniversary is the success of the Hub in obtaining funding to install solar panels which are a clean, green source of energy and a great way to reduce their carbon footprint. The sun is a free source of energy and important for reducing reliability on oil and gas.

Find out more about Luke Howard www.tottenhamclouds.org.uk
or email TottenhamClouds@gmail.com and subscribe to the Newsletter to keep up to date.

The Friends of Lordship Rec are holding our Annual General Meeting at Lordship Hub on Sunday April 3rd . ALL WELCOME to find out what we have been doing over the past year in the Rec, what plans we have for the future and how you can join the Friends and participate in the future improvement of our beautiful park. Refreshments provided. 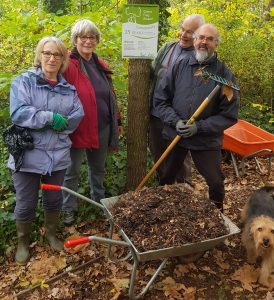 The Friends of Lordship Rec actively welcomes new people to get involved in protecting, maintaining and developing Lordship Rec. Why not put the date in your diary and get involved!