We are sad to report the passing away of Mal Hawley, the former Secretary of the Friends of Downhills and an active participant in many Friends of Lordship Rec activities and meetings in the last 10 years. In his life he had travelled widely, was an experienced carpenter, played double bass for jazz bands, made unorthodox musical instruments and was very keen on wildlife (including organising annual bird and butterfly counts in Lordship Rec and Downhills Park). Mal was kind, thoughtful and committed to a better society, with a lifelong love of music and people.  Full tribute here: Mal Hawley Tribute & Celebration of His Life

Kids Birdwatching Event at the Lake

Come and identify and count the birds at the lake in Lordship Rec. Find out about all the birds that live on and around the lake, including the best way to feed them.

Meet on the Hub Terrace next to the Cafe

Organised by the Friends of Lordship Rec, Lake Group

You are cordially invited to join us this Friday at 2pm in the Hub cafe. We will go to together to the ‘picnic area’ in the Rec (just south of the Model Traffic Area – Walpole Rd/Rusper Road entrance) where we will cut thistles and docks and put the tops in bags to prevent the area being covered in these next year.

We will provide bags, gloves and seccateurs unless you have your own in which case please bring them. We don’t have to stay long but it would be great if you come.

Sunday 6th (1st Sunday of every month)
Friends General Meeting for all Park Users to share News and Views about the Park
2.00 PM to 3.30 PM in the Hub Community Room

Friday 11th
Free Sprouting and Microgreens Workshop with Paulette
2.00PM to 4.00PM in the Hub

Sunday 20th (3rd Sunday in every month)
Friends of Lordship Rec Workday – Help with simple practical work around the Rec
Meet at 11.00 AM at the front of the Hub

Tuesday 22nd (4th Tuesday in every month)
Lordship Wildlife Group Meeting – Discuss ideas and plans to encourage wildlife in the Rec
2.00 PM to 4.00 PM in the Hub Cafe

For more information
– check out the park’s noticeboards, which are regularly updated by the Friends
– pick up various flyers from the Friends’ info table in the Hub

This very important document is the updated Plan for Lordship Rec, applying for the next 10 years, written collaboratively and agreed by the park’s user groups and by the Council. It explains all the features in the park, how they are to be maintained, and how they are being managed in partnership between the the various park community groups and the Council, coordinated overall through the Lordship Rec Users Forum. The range of user groups and their activities is also detailed, as are the current list of further improvements sought. There are some very useful appendices with further details. 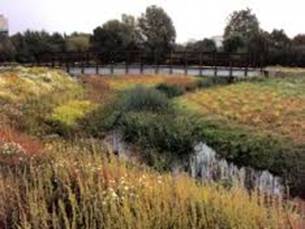 The Moselle is Haringey’s river, flowing mostly underground from Muswell Hill to the River Lea at Tottenham Hale. Its new river channel in Lordship Rec was created as part of the regeneration of the whole park in 2011/2012. It replaces the old litter-strewn ditch hidden between the trees. The new flower-lined banks are great for wildlife and look beautiful: see the info-board between the bridges, designed by one of the Friends.

MANAGEMENT AND MAINTENANCE
However, as before, the Moselle still suffers from pollution and smells. So now the Council and Thames Water have started implementing a 5-year programme of action to address water quality issues. The problem is that many homes, businesses and other buildings have plumbing misconnections which mistakenly send foul water into the fresh-water drains. These drains then feed into Haringey’s underground streams, including the Moselle. Action is being taken to identify the individual sources of this pollution (50,000 properties written to and 400 misconnections identified so far), and to ensure property owners remedy the misconnections.

COMMUNITY INVOLVEMENT
To celebrate Haringey’s river, park users produced a Moselle Walk Guide. [See link below] 5,000 have already been distributed to the public and schools etc, and there have been a number of well-attended residents’ walks along the route.

Throughout 2013 a community project, ‘A River Runs Through It’, worked with Friends of Parks Groups, schools and others to spread awareness of the rich history of the Moselle, and to rediscover some of the crafts and products traditionally associated with it. [See links below]

In November 2013, ten volunteers from the Friends of Lordship Rec trained to become regular testers of the water quality. They have formed the Lordship Rec Moselle Group and will work with the park’s User Groups and the Council to promote the Moselle, to ensure our river is gradually cleaned up as far as possible, and is generally well-looked after.

To celebrate the launch of the new River Moselle guide and the restoration of the river in Lordship Rec, 80 residents took part in a 6 mile walk on Sunday 24th June along the route of Haringey’s ‘forgotten’ and mostly underground river. The walk was organised by the Haringey Friends of Parks Forum. It started from Queen’s Wood, Highgate at 10.30am (where particpants were able to view one of the Moselle tributaries which starts off as a trickle) and ended at Markfield Park by the River Lea at 4pm. On the way it stopped at many key points to hear about some of the history of the river, its features and its surroundings. END_OF_DOCUMENT_TOKEN_TO_BE_REPLACED

National Birdwatch Survey open to all!

There will be common birds photos/recording sheets for everyone who would like to take part.

Spend just one hour wandering around the parks either singularly or in small groups (BRING THE KIDS) looking for the many different species that live with us in the parks.

We will enter our results afterwards into the RSPB website.

END_OF_DOCUMENT_TOKEN_TO_BE_REPLACED

On Tuesday 7th Feb and 28th Feb from 10:00am to 3:00pm we are having workshops in the Spinney,  Lordship Rec, Adams Rd/Freedom Rd N17 to plant young trees into a hedge on the north side and to do some dead hedging and a little hedge laying.

BTCV are coming to give a hand.

Back 2 Earth will provide a lunch and hot drinks for volunteers.

It would be good to see you there. Do tell anyone else you know who would like to be involved.